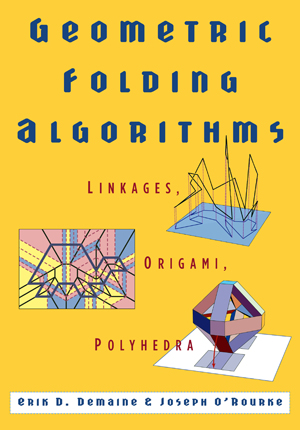 the algorithms behind building TRANSFORMERS and designing ORIGAMI

Whenever you have a physical object to be reconfigured, geometric folding often comes into play. This class is about algorithms for analyzing and designing such folds. Motivating applications include Major progress have been made in recent years in many of these directions, thanks to a growing understanding of the mathematics and algorithms underlying folding. Nonetheless, many fundamental questions remain tantalizingly unsolved. This class covers the state-of-the-art in folding research, including a variety of open problems, enabling the student to do research and advance the field.

We will organize an optional problem-solving session, during which we can jointly try to solve open problems in folding. In the past, these sessions have led to important new results and published papers, as well as class projects.

Class projects more generally can take the form of folding-inspired sculptures; formulations of clean, new open problems; implementations of existing algorithms; or well-written descriptions of one or more papers in the area. Projects can be purely mathematical (geometric) and/or theoretical computer science (algorithmic/complexity theoretic) and/or artistic. Students are also required to do a project presentation and a small number of problem sets.

This is an advanced class on computational geometry focusing on folding and unfolding of geometric structures including linkages, proteins, paper, and polyhedra. Examples of problems considered in this field: Many folding problems have applications in areas including manufacturing, robotics, graphics, and protein folding. This class covers many of the results that have been proved in the past few years, as well as the several exciting open problems that remain open.

The textbook for the class is Geometric Folding Algorithms: Linkages, Origami, Polyhedra by Erik Demaine and Joseph O'Rourke, published by Cambridge University Press (2007). The list price for the hardback is $99. Nine copies will be available at the MIT Coop at this price. Amazon offers a sale price of $79. A further reduced price is available as part of a bulk class purchase; let Erik know if you want to be part of it.

We welcome both undergraduate and graduate students from all universities, although officially this is a graduate class.

This class was offered twice before under the class number 6.885, in Fall 2007 and Fall 2004. You might be interested in the lecture notes, problem sets, etc. from those offerings.